How to write a custom graphics¶

In this section, we'll show how to create a custom graphics by writing custom GLSL shaders. This is an advanced topic as it requires understanding the basic of GPU graphics programming.

Only the C API supports custom graphics at the moment. Python bindings for custom graphics will come in an upcoming version. Datoviz already includes the code necessary to compile GLSL shaders to SPIR-V on the fly (based on Khronos glslang).

The full source code for this example can be found in examples/custom_graphics.c.

As a toy example, we'll create a graphics with square points of various size and color. Specifically, we'll require each point to have a different size (which is not supported in the existing point graphics), and a color depending directly on the size and computed directly on the GPU. We'll use a single byte per vertex to store the vertex size (between 0 and 255 pixels), and we'll use no memory for the color since it will be determined directly by this value. This kind of memory optimization is one of the use-cases of writing custom graphics. Limiting memory usage is important when dealing with extremely large datasets (tens or hundreds of millions of points). 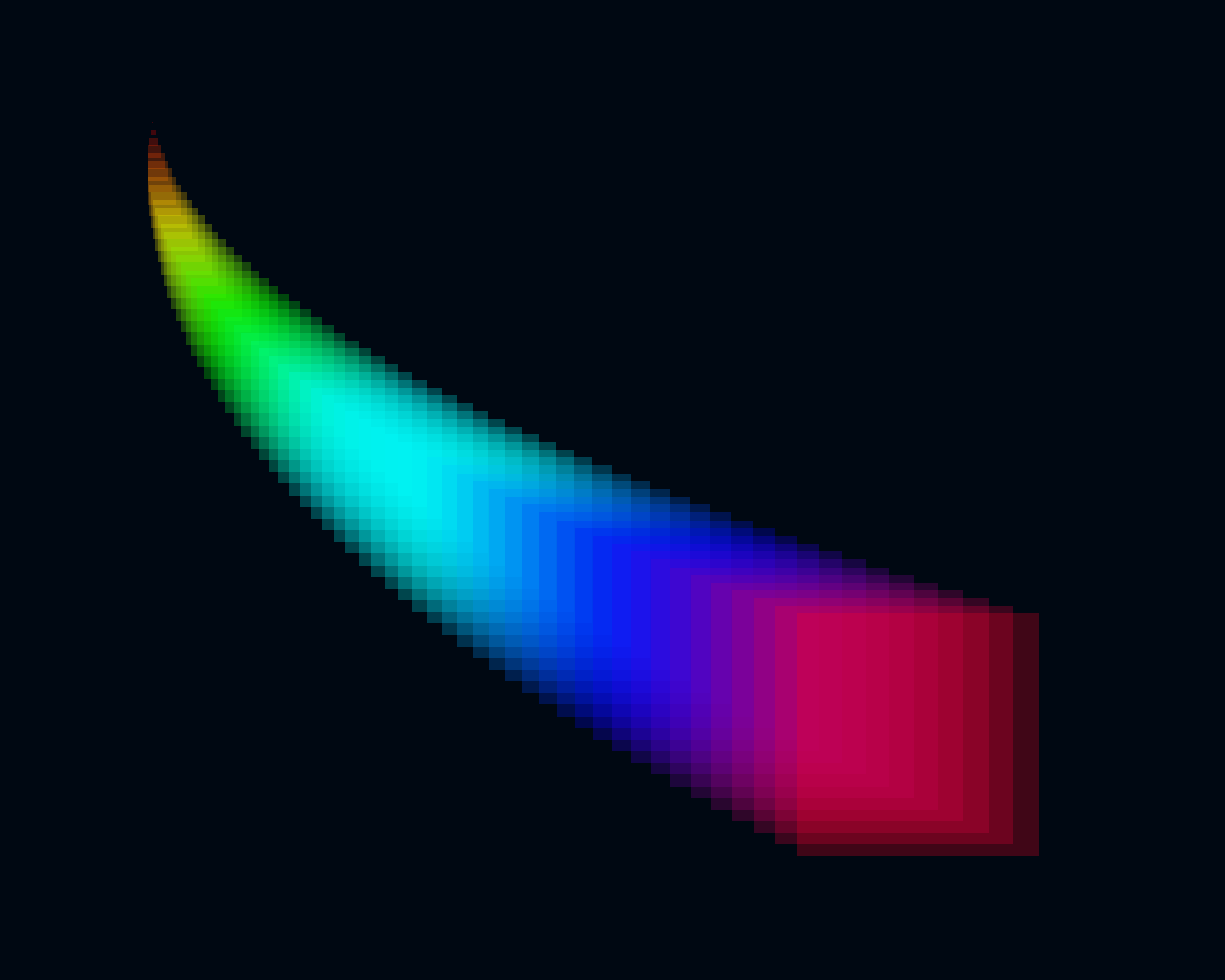 Here, we show how to create a custom graphics compatible with the scene API, so that it can be used added to the scene the same way as builtin visuals. One could however decide not to use the scene API at all, and leverage instead the vklite API directly. This allows one to create entirely custom and standalone applications. This is not documented at the moment, and one should look at the vklite unit tests to understand how to use the vklite API directly.

Other less common primitive types are described in the Vulkan specification.

Triangle fans are not supported on macOS.

Schematic from the Vulkan Cookbook by Pawel Lapinski, O'Reilly

The circular arrows in the triangles above indicate the orientation of the triangles, which is taken into account by the GPU. It is good practice to always ensure that all triangles constituting a given object are consistent. For example, when triangulating a square with two triangles, the order of the vertices should be chosen such that both triangles are directly oriented. The graphics pipeline can be configured to handle triangle orientation in a specific way. For example, one can make a graphics pipeline where indirectly oriented triangles are automatically discarded.

Line primitives typically have a width of 1 pixel, although some hardware supports thicker lines. In Datoviz, thick, high-quality lines are implemented with triangles instead (line triangulation), and the antialiased thick line is drawn directly in the fragment shader. "Basic" line primitives are only used for testing and for special high-performance applications where scalability and performance are more important than visual quality.

The most commonly-used primitive types in scientific visualization are essentially point lists and triangle lists (and to a lesser extent, triangle strips).

In this example, we'll use a point list, where each point will correspond to one square.

Once we know we'll use a point list as a primitive, the next step is to define the vertex data structure / vertex shader attributes. Here, we want the following attributes for each vertex:

We could have simply used a floating-point for the edge length, but that would have used four bytes instead of one. This is also to show the versatility of Vulkan and GPU programming, where we have full control on the data types used on both the GPU and CPU.

Here is our vertex C structure:

We also need to define the attributes in GLSL:

In this example, we use a uint8_t (byte) on the CPU, but a float on the GPU. Vulkan provides a way to specify the way we want to do the casting. This is done when creating the graphics pipeline below. We can just say here that we'll use the Vulkan format VK_FORMAT_R8_USCALED. This format means that:

Here are the other common scaling options provided by Vulkan when using bytes:

A few comments can be found below.

The #include directive is provided for convenience by the GLSL to SPIR-V compiler glslc. It is used extensively in Datoviz. It provides a simple way of making all graphics shaders share some functions and resources. In particular, we make the convention that, in order to be compatible with the scene API, all graphics pipelines in Datoviz must have the following common slots:

This is done just by including common.glsl in every shader. Note that this is not required when using completely standalone graphics pipelines that will never be used with the scene API.

When one needs to add another bindings, the numbering should start at USER_BINDING, a special GLSL macro that is currently 2.

The std140 keyword refers to the alignment of the fields within the uniform structure. We're not going into the details, but we'll present some relatively arbitrary rules that we follow in Datoviz so that we don't need to think too much about memory alignment considerations when working with uniform structures:

The vertex shader may pass some variables to the next stage, typically the fragment shader, using varying variables.

For example, passing 0 to one vertex and 1 to the next vertex in a graphics with a line primitive would result in all pixels being passed a real value between 0 and 1 depending on the position of that pixel within that line segment. This system is used in particular with:

The common.glsl file defines (several overloaded versions of) the function transform(), which applies the model-view-proj matrices stored in the first bound resource, the MVP uniform. The associated C structure is DvzMVP:

We use a few special GLSL variables in the vertex shader:

There are many more special variables available in each type of shader. You'll find the list of special GLSL variables here.

The colormap() function is implemented in colormaps.glsl. It provides a GLSL implementation of a few common colormaps, which allows to compute the color as a function of a scalar value without using a texture. There are a few advantages to this, mostly related to performance and avoiding edge effects when using nearest interpolation in the texture.

We now pass to the fragment shader. Here is the code:

Here are a few comments.

Datoviz panels may have margins around them. We make the distinction between:

We follow the convention that the normalized coordinates [-1, +1] correspond to the inner viewport. Vertices beyond these limits will be rendered in the margins.

Clipping allows to hide all pixels outside the inner viewport. This is how we implement the axes controller: graphics should not be rendered in the margins which contain the tick labels. Any graphics that should be compatible with the axes controller should therefore have the special CLIP macro at the beginning of the fragments shader (implemented in common.glsl). This macro detects whether the current pixel is beyond the inner viewport, and if the graphics has been configured so, it discards that pixel.

We haven't used any special variable in this fragment shader, but here are two useful variables that we could use:

The gl_PointCoord variable is reserved to graphics pipelines using a point primitive. It provides the coordinates, in pixels, of the current pixel within the square. The origin is at the upper-left corner of the square.

Compiling the shaders to SPIR-V¶

Once the shaders have been written, they should be compiled to SPIR-V (unless using Datoviz to compile shaders provided as GLSL code, but this is a work in progress). Here is how to compile the shaders on the command-line:

The glslc command is provided by the Vulkan SDK.

Here is the code to create a custom graphics compatible with the scene API, and to add it to a custom visual:

As shown here, the creation of a custom graphics involves the following steps:

There are further functions in the vklite API to customize the creation of the graphics pipeline. Refer to the Datoviz C API reference for more details.

Here is how to add a custom graphics to a custom visual:

At this point, the custom visual contains common sources (vertex, MVP, viewport) and props. One could then define more sources and props.

Finally, here is how to use our custom visual with a custom graphics:

Here are a few comments:

We didn't yet cover these other aspects: